Ethiopia PM in Rome on official visit, heads to Davos for WEF 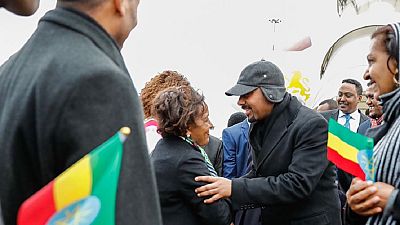 Ethiopian Prime Minister Abiy Ahmed on Sunday arrived in Rome, Italy his first stop on an European tour that will see him attend the upcoming World Economic Forum, WEF, in Davos, Switzerland.

State media outlets say he is due to meet with top officials in Rome including his counterpart Giuseppe Conte. Abiy’s last European tour saw him visit France and Germany in November 2018.

Conte visited Ethiopia in late 2018 and extended an invitation to Abiy to visit Rome. Conte’s visit started in neighbouring Eritrea before he flew to Addis Ababa.

Whiles in Italy, Abiy and his delegation will also bold key bilateral meetings with development partners, reports have confirmed.

The delegation will fly to Switzerland for the WEF which starts on Tuesday January 22 and ends on 25 January, 2019.

The theme of this year’s Forum is “Globalization 4.0: Shaping a New Architecture in the Age of the Fourth Industrial Revolution.” Abiy deliver an address to the gathering on January 23 and will interact with world leaders, global business leaders, economists, and other international finance bodies.

PM Abiy Ahmed, accompanied by his delegation, is set to begin the Europe visit today. During the visit, PM Abiy will meet with various Int’l dev’t partners on the margins of the World Economic Forum in Davos, Switzerland, where he is also scheduled to address global leaders.

His reform efforts back home have endeared the Horn of Africa nation to lots of international goodwill. Ethiopia has repeatedly been assured of a plethora of international support for the PM’s reforms.