Gold rush has heightened in Malawi with thousands of prospectors digging, shoveling and combing the soil in scorching temperatures in the age-old search.

Local officials say traders from neighbouring countries pay up to $34 a gram for the gold in Nathenje, located about 20 kilometres south of Malawi’s capital Lilongwe.

According to gold digger, Thandizeni Natani, her new job fetches more money than the previous one.

They are illegal because they had no official government documents allowing them to go into these areas.

“At first, I was doing a lot of work, but it was a waste of time. I bought a piece of land and started looking for gold. I sold the first quantity for about US$35. The second time, I got about US$10.“

The sudden illegal mining boom has also hit six other regions of the landlocked country besides Nathenje.
A situation local authorities say is worrisome.

“They are illegal because they had no official government documents allowing them to go into these areas,” said Sangwani Phiri, spokesperson for the Ministry of Natural Resources.

For its first time, most of Malawi’s gold is currently sold in neighbouring countries including Mozambique, Tanzania or Zambia at between 22 and 34 dollars per gram. 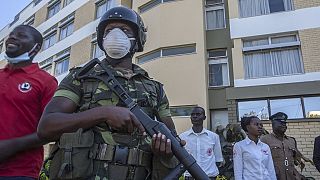