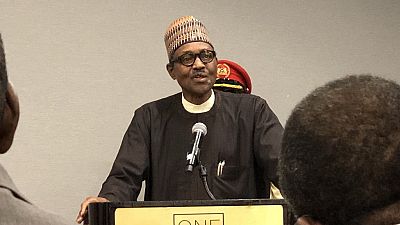 Nigerian president Muhammadu Buhari has mocked a number of former allies who quit the ruling All Progressives Congress, APC, months back but are seeking the presidential ticket of the main opposition.

Whiles addressing a cross section of nationals on the sidelines of his participation at the United Nations General Assembly, UNGA in New York, Buhari said he was the sole candidate running for the APC ticket because all his opponents had left.

“I am the only one contesting for Presidency in APC, those who wanted to contest against me left for other parties, but I will meet them there,” he is reported to have said.

I am the only one contesting for Presidency in APC, those who wanted to contest against me left for other parties, but I will meet them there.

Persons he is talking about include Senate president Bukola Saraki, former vice-president Atiku Abubakar, Governor of Sokoto State, Tambuwal and Kano State Senator Musa Rabiu Kwankwaso – all of who have left the APC and joined the opposition Peoples Democratic Party, PDP.

“As a President, I have one vote, and as a Nigerian you have one, so we have something in common, go out and vote, and your vote will count,” he added.

Buhari came to power on the APC ticket defeating then incumbent Goodluck Jonathan who was seeking a second and final mandate.

Elections are due in February next year as Buhari vies for a final four-year mandate.