Background to 2018 presidential elections in Cameroon 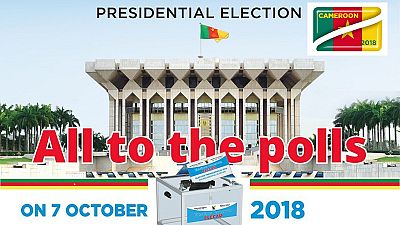 Cameroon will go to the polls on October 7, 2018, in what is now termed one of the most uncertain and dreaded presidential elections the country has witnessed.

The decision to organize an election was announced in a press release issued by the incumbent President, Paul Biya, removing all doubts as to whether the violence-gripped nation would make it to the polls.

The 2018 presidential race will take place in a delicate and volatile context, where fear is rife that the nation could slide into a civil war as violence continues in the Southwest and Northwest regions.

The elections governing body, ELECAM, on August 7, 2018 published a list of 9 candidates including, Paul Biya who is seeking to extend his 35 years in power.

However, there are doubts that the election will be free and fair, especially in the Anglophone regions which have been in turmoil for the past two years, when residents started pressing their claims for more autonomy or even independence.

How Biya finds himself in the 2018 Presidential Race

After being elected five consecutive times for the presidency (in what was a one-party state), Ahmadou Ahidjo resigned in Nov. 6, 1982, and handed power to Paul Biya, who proceeded to oust Ahidjo from chairmanship of the ruling party in 1983.

In 1996, the CPDM oversaw the introduction of a new constitution which limited presidents to two seven-year terms, with Biya’s second term under that constitution to expire in 2011.

Some provisions of the law N° 96/6 of 18 January 1996 were revised and supplemented to amend the constitution of 2 June 1972, allowing the President of the Republic to be elected for a seven years rule with no term limit.

Since the 2008 constitutional amendment, Biya, 85, has now been in power since 1982, making him one of Africa’s longest-serving leaders.

The shift from a one-party to multi-party system.

Under President Ahmadou Ahidjo’s rule, the country was a one-party state, with the Cameroonian National Union being the sole legal party.

Biya introduced political reforms within the context of a one-party system in the 1980s and after serious pressure, he accepted the introduction of multi-party politics in the early 1990s.