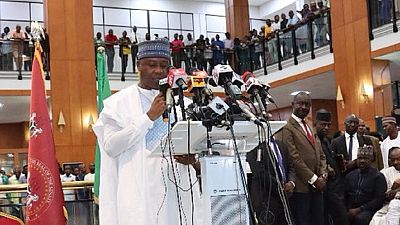 Saraki wrote on Twitter that he had submitted the presidential nomination and expression of interest forms to the PDP at the Abuja headquarters of the party, adding “It is time to #GrowNigeria!”

After giving reasons among others that the APC had failed to deliver on the promises that brought them to power in 2015, he declared his presidential ambition almost a month later on August 30.

He is reported to have quit the APC seeing that incumbent Muhammadu Buhari had expressed interest in seeking a second and final term in office. Saraki, a former Kwara State governor on the ticket of the PDP, will come up against a number of heavyweights.

He has fended off calls to resign his post as leader of the Senate because it was a post he got by being an APC member. He insists that it is a role he got from colleague senators and not the party.

APC leadership are on record to have threatened to impeach him if he fails to step down. The Senate is currently on recess and is not known when it will be reconvened.