Scientists search for sustainable solutions to stop the fall armyworm 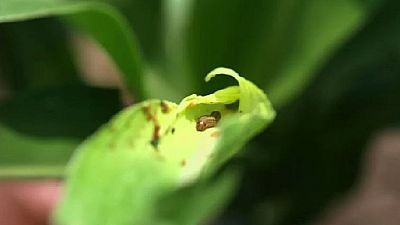 Scientists in Britain are hoping to find a sustainable way to stop the march of the voracious fall armyworm caterpillar without using pesticides.

The crop-chomping pest has wrought havoc in Africa and is now threatening millions of farmers in Asia after the first reported infestation of it in India.

A female fall armyworm moth can lays up to 1,000 eggs in her lifetime, targeting maize, sorghum or millet but can feed on 80 different crops, including rice, vegetables, groundnuts and cotton.

“It could cause 20 to 50 percent crop losses of the maize crop which is the main subsistence serial crop which the farmers and the population in general are relying on for their food supply,” Bruce said.

Bruce is collaborating with the International Centre of Insect Physiology and Ecology (icipe) in Kenya to develop a novel pest management system which fights ‘nature with nature’, without using expensive pesticides.

“We’re looking at the crop variety seeing if we can get more resistant crops,” Bruce said.

The team are also hoping to identify the pests’ natural enemies and the plants they are most attracted to.

“When the plant is attacked by the caterpillars then it releases a different smell and that’s something which we’re very interested in because these natural enemies they use that as a foraging cue. So they are tuned in to the smell of that. So they use those odours for finding their prey and we want to improve that so that we can have varieties that are better at attracting these natural enemies and increasing the biological control that way,” Bruce said.

The team are trialling a novel bait station designed to use natural alternatives to chemical killing agents.

“Anything that will kill an insect is referred to as a killing agent but the key difference is that it’s not a synthetic pesticide and it’s not being sprayed to the whole crop. It’s a very targeted solution so the chances of it actually coming into contact with a beneficial insects is a lot smaller that if you were to spray an entire crop with a synthetic pesticide,” said Dr Joe Roberts, a Insect Chemical Ecology researcher.

In Africa, the United Nations Food and Agriculture Organisation (FAO) field schools have trained thousands of farmers how to crush the pest by hand and curb its spread with bio-pesticides made from plants like neem and tobacco or by using natural predators like ants.

Other remedies include applying ash, lime, sand or soil to infested plant parts.