Emmerson Mnangagwa urged Zimbabwe to unite behind his presidency on Sunday, as he took the oath of office following a divisive election.

The Constitutional Court confirmed Mnangagwa as president on Friday, dismissing a challenge by the man he beat in the July 30 ballot, Nelson Chamisa.

Thousands of Zimbabweans, some bussed in, and foreign leaders including South Africa’s Cyril Ramaphosa and Paul Kagame of Rwanda gathered at Harare’s national stadium for Sunday’s swearing-in.

Now that elections are behind us, we must now focus on addressing the economic challenges facing our country

He took the oath before Chief Justice Luke Malaba who, together with eight other judges, had ruled on Friday against opposition leader Chamisa’s petition.

In his inauguration speech at the national stadium in the capital Harare, Mnangagwa said, ‘‘now that elections are behind us, we must now focus on addressing the economic challenges facing our country’‘ adding, that the economy would require some radical reforms to attract foreign investment.

The election was touted as a crucial step towards shedding the pariah reputation Zimbabwe gained under Mnangagwa’s predecessor Robert Mugabe, and securing international donor funding to revive a crippled economy.

But procedural lapses and an army crackdown against opposition supporters undermined its credibility. 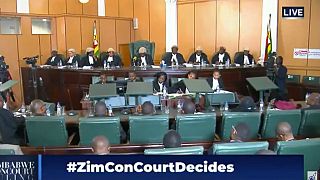