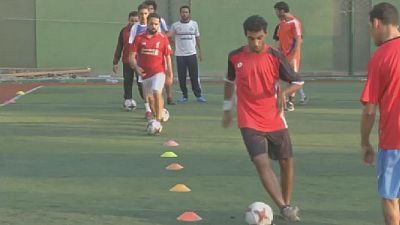 This field brings together people with cerebral palsy to play football with the hope of reaching global competitive stages.

It is Egypt’s first football team set up by Abdallah Essam who is affected by cerebral palsy himself, to fight stigma preventing athletes with disabilities in Egypt from chasing their goals.

Essam sought help from Egypt’s blind football team, and was able to gather more than 15 players to form a team for people with cerebral palsy.

I wish that people with disabilities or those afflicted with cerebral palsy join us, so we would have a bigger base to communicate with officials to create a federation and league here in Egypt.

“We hope that all people hear about us and I wish that people with disabilities or those afflicted with cerebral palsy join us, so that we would have a bigger base to communicate with officials to create a federation and league here in Egypt”, he said.

Young men with cerebral palsy rushed to join the team to play free.

“I started playing football a long time ago but in this team I found myself playing with full freedom. While playing with my abled friends, there were people who were saying that they need to be careful around me. When playing with my friends here I do not feel like this at all and I feel that there is freedom. We are equal and there are no psychological pressures”, Ashraf said.

The team has called on government officials to come watch them play. They hope to start a league in Egypt where all individuals with motor impairments could join.

Founder of the team said cerebral palsy football is officially present in more than 60 countries around the globe.

The first International cerebral palsy football competition was held in Scotland in 1978.