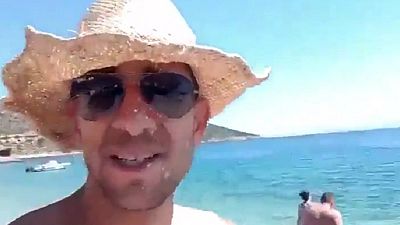 A South African man at he center of a recent racial incident has apologised for what he said was the “unspeakable pain” he caused by making a racist slur in a video that went viral in the country.

Adam Catzavelos has been the subject of huge backlash from a broad section of the community since the video surfaced. He filmed himself on a beach on holiday, saying it felt heavenly because there were no black people there.

In the video, he is heard saying: “And not one kaffir in sight. Fucking heaven on earth.”

I have been thoughtless and insensitive and shown a complete lack of understanding of what the people in our nation have endured.

The “K word” as it is known in South Africa is apartheid-era slang for a black person and is regarded as a deeply offensive slur on a par with the “N word” in America.

In a statement, Mr Catzavelos said: “I have caused unspeakable pain to every single person in South Africa. The extensive damage my unfortunate video has caused to a country desperately trying to heal racial tensions is unacceptable.

“I have been thoughtless and insensitive and shown a complete lack of understanding of what the people in our nation have endured.

“I have insulted so many of my people. I am not proud. I have watched my video and feel total shame.”

The family business immediately dissociated itself from the statement and fired him from his job. They also said his shareholding was being discussed.

The situation also forced some Nike stores to close after he was said to have links with the sportswear company. Later reports said it was his wife who was an employee.

Nike declined to comment on the store closures, but issued a statement reiterating its “long-standing commitment to diversity, inclusion and respect”, adding that the man seen in a video posted online was not a company employee.

The Economic Freedom Fighters (EFF), a party known for its hard-left and African nationalist positions, said it would file a criminal complaint against the man in the video.

In January, protesters led by the EFF trashed six H&M stores over an ad by the retail chain which featured a black child modelling a sweatshirt with the slogan “coolest monkey in the jungle.”

South Africa remains deeply scarred by its apartheid and colonial past, with the racial reconciliation embraced by the late president Nelson Mandela frequently marred by racist incidents.