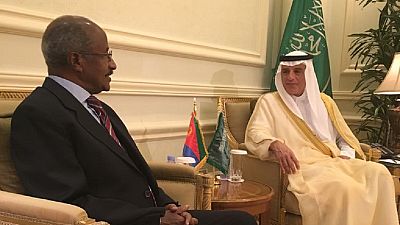 An Eritrean delegation led by Foreign Minister Osman Saleh on Sunday arrived in Saudi Arabia for a visit aimed at deepening relations between the two countries.

Saleh met with his Saudi counterpart Adel Jubeir during which meeting they discussed consolidation of bilateral ties, particularly trade and investment ties.

According to Eritrea’s Information Minister, Yemane Meskel, “Both sides further discussed the recent developments in the Horn of Africa, especially peace and friendship between Eritrea and Ethiopia.”

He added that the Adel Jubeir confirmed that Saudi Arabia was ready to make its own contributions to consolidating the peace.

The two sides also dilated in the recent Eritrea-Somali peace talks that saw both countries restore all friendly and diplomatic ties stressing that it will help Somalia overcome its challenges.

Eritrean president Isaias Afwerki was in Saudi two weeks ago on the invitation of King Salman. Both leaders also discussed similar issues. Saleh was part of Afwerki’s delegation then and this meeting is believed to be aimed at consolidating the talks.