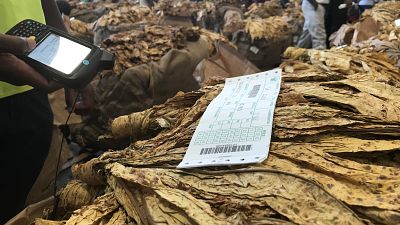 Zimbabwe’s tobacco sales have reached a record high of 237.1 million kilos just as the selling season nears its end – figures that could help ease the country’s severe dollar shortage and a sign that controversial land reforms could be working.

It accounted for a quarter of Zimbabwe’s $3.8 billion in total export earnings in 2017, behind gold.

The sector was previously dominated by white farmers until they were forcibly evicted in a controversial government land seizure drive in 2000.

Tens of thousands of black farmers who benefited from the land reforms are growing tobacco.

Simbisai Mutezi worked as a waitress until a year ago when she started farming tobacco on family land seized in 2000.

The 28-year-old supports her sisters and extended family through farming. She said this season’s sales have been so good, she will be investing her profits to expand crop coverage.

“As I came now, I see everything is better because if I manage to get like lot of money – like this season I can be able to get like $3,000 I can survive the whole… I can even buy another input to put in, to go back and plough again. So, it’s been better for me because it can change my life. It’s something that can really change my life,” said Simbisai.

Growing demand from China, the world’s biggest smoking nation, and funding from private tobacco companies have boosted output, which plunged to its lowest in 2008.

“In the previous years, we could not satisfy the market, buy now what it means is that we are able to satisfy our orders. So, it means more foreign currency and it also means more income to the tobacco merchants. For the farmers, yeah, they are benefiting quite a lot cause the more the tobacco that you have, the more money that you get,” said tobacco buyer, Edwin Maranga.

Tobacco Industry and Marketing Board (TIMB) data showed that sales of the crop at local auctions had eclipsed the previous record of 236.9 million kg in 2000.

“The transformation that happened, in other words the change of profile of the grower from the large-scale farmer, producing an average of 40 hectares, to the small-scale farmer producing an average of one hectare has been very beneficial to the industry. It has allowed more people, more households to benefit from the very lucrative crop and it has also put Zimbabwe tobacco crop in line with the rest of the world,” said Matibiri.

The nation of 13 million people will on July 30 hold its first presidential and parliamentary vote since Robert Mugabe was forced to resign after a coup amid expectation that this could help unlock foreign funding if certified free and fair by the international community.

“We want change here, we want things to change so that people can have jobs, they can do more farming you understand. Because as we were young, we grow on farming that is how we are based in Zimbabwe. So, I think it’s something that can change life for a lot of young people who are just you know, coming up,” said Simbisai.

Tobacco has become the biggest success story of the government’s land reforms, which Mugabe defended as necessary to correct skewed colonial land ownership.