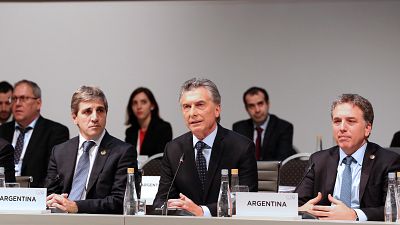 Against the backdrop of the United States having escalating trade disputes with other countries, the topics of free trade and protectionism highlighted the two-day meeting which opened in Buenos Aires, capital of Argentina, on Saturday.

U.S. Treasury Secretary Steven Mnuchin urged Europe to respect “free, fair and reciprocal trade”, while French Finance Minister Bruno Le Maire called on the United States to return to rationality as global trade cannot base itself on the law of the jungle, adding that the law of the jungle will only weaken economic growth, exert terrible impact on fragile countries and trigger political catastrophe.

According to Chinese finance minister Liu Kun, the BRICS countries — Brazil, Russia, India, China and South Africa — should strengthen communication on policy-making within the framework of G20. He also called on all countries to stand firm against unilateralism and all kinds of protectionism.

Although no final consensus was reached, Argentine Finance Minister Nicolas Dujovne called the meeting a success as it provided a good platform to all members.

“We don’t deny there are differences among the member states as direct speeches were very often in our discussions. But we have to focus on consensus when making the final documents, because it is the most important job for us to make sure the institution runs smoothly,” Dujovne said.