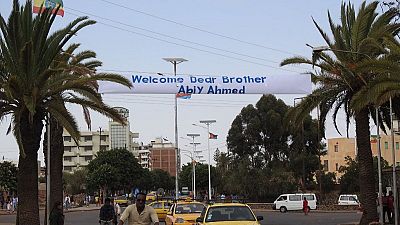 Streets in the Eritrean capital Asmara have been lined with several banners welcoming the Ethiopian prime minister, Abiy Ahmed, who is expected to make a historic visit to the country.

The US Chief of Mission in Asmara, Natalie E. Brown tweeted pictures of several Ethiopian flags hoisted alongside Eritrean flags and banners reading ‘ Welcome Dear Brother Abiy Ahmed’ which she added were written in English, Amharic, Tigirinya and Oromiya.

Flags are lining the main streets. Banners in English, Tigrinya, Amharic, and Oromiya are going up. There's an air of excitement. What an interesting time to be in #Asmara. #Eritrea #Ethiopia pic.twitter.com/JhGdI0wse2

Amharic is the official language of Ethiopia while Tigrigna is one of the languages spoken in Eritrea. Abiy who is Oromo is fluent in all four languages.

Several other social media users posted pictures showing roads, junctions and other key landmarks in Asmara adorned by the Ethiopian and Eritrean flags.

#Eritrea #Asmara is opening its hands to #Ethiopia and waiting for the visit of Dr_abiy PM_AbiyAhmed. Ethiopian flag on the skies of #Asmara. Peace is prevailing. Eritrea won the THE PEACE! pic.twitter.com/x6Snyqyznj

Nothing is more important than peace and stability to #Eritrea and #Ethiopia people. Welcome to Asmara prime minister Abiy Ahmed. pic.twitter.com/YdEqS7FHie

Asmara, Massawa & Keren are instructed to make extensive preparations to welcome #Ethiopia's PM Abiye Ahmed who is expected to visit #Eritrea on Sunday. Government institutions've informed their employees to come out to the streets of Asmara at 7:30am local time to welcome the PM

Following the historic visit to Addis Ababa by an Eritrean delegation last month, it was announced that Abiy would soon meet Eritrean president Isaias Afwerki.

Before the June visit, no Eritrean representatives had been part of an official visit for talks with the Ethiopian government since at least 1998.

More pictures! #Ethiopia-#Eritrea.
While Eritrean flag has been on display in the streets of #AddisAbeba during #AU summits, the display of Ethiopia's official flag at official capacity in Eritrea may be the first since the 1998-2000 war. Have your say.
Pics: teklia_mekonnen pic.twitter.com/CGfHEsSMsS

If the politics b/n our two countries goes smooth & as planned, I am sure I will be in Asmara, Massawa, Keren, Aqordat, Tesseney, Gindea, Embatkala, Karrora since late September! See you then!