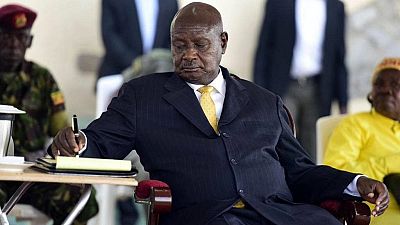 Ugandan President Yoweri Museveni has accused the Government of the Democratic Republic of Congo and the United Nations of harbouring the Uganda Allied Democratic Forces (ADF) rebels, and threatened to “come up with a solution for them.”

Museveni blamed the increasing cases of kidnaps, assassinations, and murder of especially women in the Central part of Uganda, on this the rebel /terrorist group.

“The terrorists of ADF are still in Congo, preserved there by the United Nations, and the Congo Government,” said Museveni while delivering the State of the Nation Address.

The terrorists of ADF are still in Congo, preserved there by the United Nations, and the Congo Government.

The UN, through its Organization Stabilization Mission in the Democratic Republic of the Congo (UNMISSON) has been engaged in constant battles with remnants of the rebel group, which was flashed out the country over a decade ago.

Over 18000 UN peace keeping troops are currently deployed in the DRC, under MUNUSCO, at a cost, according to reports of about $8.7Billion so far.

The tough talking Museveni said ADF are thriving in the DRC because they are being kept there by the UN and the Congo Government.”

“If however they were to re-enter Uganda, they would be promptly and decisively defeated,” he said, adding that Uganda is nonetheless looking for solution to the rebel group.

“The ADF in Congo will answer for the killings of our people. Even when they are hiding in Congo, their only safety is for them to surrender and seek amnesty. They feel they are safe and the UN is keeping them there, and the DRC government, but we shall get a solution for them.”

Museveni said in his address, that Uganda managed to defeat the ADF, Joseph Kony’s LRA and other rebel groups by 2007.

He noted however that the remnants of the ADF are still wreaking havoc in Uganda, especially in urban areas, talking advantage of the lack of intelligence infrastructure there.

He said the ADF were responsible for the murder of 7 Muslim Sheiks, as well as Major Muhammad Kiggundu, AIGP Felix Kaweesi, Prosecutor Joan Kagezi and most recently Susan Magara.

The president noted however, that the recent spate of murders of women in the areas of Masaka and Entebbe, as well as kidnaps of women and young children, are being orchestrated by local criminals.

He cited one Muhammad Kiddawalime, who was arrested in the so called Bijambiya attacks in Masaka.

Kiddawalime and one Musa Galiwango, in January escaped custody during a court session, before the former was killed later in April by residents and police during a robbery.

Museveni commended the police officer, Cadet ASP Stephen Twinomigisha , who he said wrestled down the suspect and disabled him.

“With immediate effect I promote him to the next rank,” he said to a cheering audience.

Museveni later after the address decorated Kiddalime’s would-be victim, one Nakyambadde, who alerted neighbours as the assailant broke into her house.

“When the obnoxious Kiddawailme was about to start robbing and raping her, she telephoned neighbours and threw the phone out of the window. When he entered, he didn’t know that she had already alerted people,” he said.

“Some of these criminals are just village thugs, but because there is no mobilization, they become like a big problem.”

Museveni reassured that his government is currently gathering intelligence capacity in towns and on highways to overcome the urban based terrorism, noting, “We are about to round off the building of that capacity.”

The President said, securing towns is still problematic, being too populous, with many buildings and cars.

Some of his advisors, he said, had suggested resuming of roadblocks, but he opposed this method.

“I said no because these will inconvenience people who have nothing to do with the problem.”