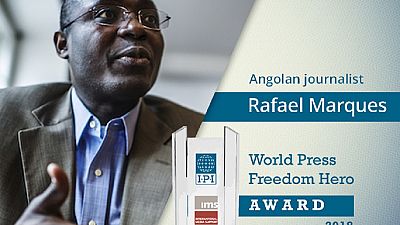 Angolan journalist Rafael Marques has won a top press freedom award for braving decades of government harassment in his quest to fight corruption through journalism.

The journalist who has been jailed in the past for reporting on the plunder of Angola’s natural resources, was named ‘World Press Freedom Hero’ by the International Press Institute (IPI).

IPI’s World Press Freedom Hero award honours journalists who have made significant contributions to the promotion of press freedom, particularly in the face of great personal risk.

I am honoured because this award comes at a time when I am on trial for exposing high-level corruption, while President Lourenço claims to be fighting it.

The award will be presented to Marques on June 22 in Abuja, Nigeria at the IPI’s annual World Congress and General Assembly. IPI will also present the 2018 Free Media Pioneer Award to Philippine news website Rappler.

Marques started his journalism career reporting for state-owned newspaper Jornal de Angola in 1992, but he was soon fired after failing to favorably report on the government as expected.

His reports which have often called out former president Jose Eduardo dos Santos and his cronies for corruption, incompetence and sabotage of the national economy have earned Marques persecution and harassment.

In 1999, he was arrested and charged with defamation after describing president dos Santos as a dictator. He spent 43 days in pre-trial detention before being convicted and given a six-month prison term in March 2000. Angola’s Supreme Court later reduced the penalty to a suspended sentence.

IPI Executive Director Barbara Trionfi hailed Marques for his dedication to pursuing truth at all costs.

“Despite Angola’s systematic repression of independent media, Rafael Marques has managed, at great personal risk, to bravely and persistently shine a light on abuse of power at the highest levels”, she said.

“I am honoured because this award comes at a time when I am on trial for exposing high-level corruption, while President Lourenço claims to be fighting it,’‘ Marques remarked.

Marques and a colleague, Mariano Brás Lourenço are battling a court case where they are accused of insulting a public authority over a 2016 article scrutinizing a real-estate transaction involving Angola’s then attorney-general.

The pair face up to four years in prison if convicted. The case has raised doubts about possible democratic reform in Angola under President João Lourenço, who succeeded dos Santos last year.

Previous winners of the award include Ethiopian journalist and blogger Eskinder Nega, who spent nearly six years in prison before being freed in February 2018. He was named the 2017 World Press Freedom Hero.

Local Flights Take Off Once Again in Angola Post

Local Flights Take Off Once Again in Angola Post