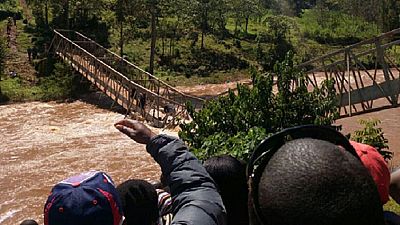 A Kenyan county governor and the deputy of another county fell into a river on Friday morning, the privately-owned Capital FM’s news portal reported.

Machakos governor Alfred Mutua and Kisii Deputy Governor Joash Maangi were on Friday morning “fished out of River Kuja after falling off a bridge in Ogembo,” the report said.

According to the Capital News correspondent, the two men landed in the river whiles taking a selfie on the bridge. It is not known why the two decided to take a selfie on the particular bridge.

There have since been sent to a hospital aboard an ambulance. It is believed that the cause of the accident is due to strong currents occasioned heavy rains in parts of the country.

But Mutua, a former government spokesperson, sees the brighter side of the incident. He denies that they fell into the river instead, that they were splashed with water.

This incident was a blessing in two ways:

I feel blessed and baptized by the waters of this very important river. The people of Gucha are telling me now I have become their child and should even come and build a home in the region. pic.twitter.com/AGXLOUBHly

“It is God’s hand at work because it is clear that the bridge would have collapsed anytime soon. By giving way while Government officials were there it means that lives that could have been lost later today or tomorrow were spared,” he said in another tweet.

Kenyans online have reacted differently to the incident. Most Twitter users contend that it served the politicians right given that they oversee shoddy constructions.

Machakos County with a population of over a million as at 2009, is located 63 kilometers southeast of the capital Nairobi. Its largest town is Machakos, the Kenya’s first administrative headquarters.

The county borders Nairobi and Kiambu counties to the west, Embu to the north, Kitui to the east, Makueni to the south, Kajiado to the south west, and Muranga and Kirinyaga to the north west.