Homeless and struggling mothers enjoyed a Mother’s Day meal on Saturday on Los Angeles’ Skid Row, a downtown area with one of the highest concentrations of homeless people in the United States.

The women each received a Mother’s Day flower and were served a lunch of baked pasta and blueberry cake, before being sent off with a gift bag.

Penny Davis, 59, is one of the 55,000 homeless people in the Los Angeles metro area. She lives in a tent on Skid Row and says being recognized as a mother is important to her.

And they live on the streets and in the sidewalk cafes, they live wherever, just to try to say, look, I'm as good as you are and just give me a chance, give me a chance. And so, we give them a chance here at Skid Row.

“The mission and the people, families that come, they help us celebrate and don’t forget that we are mothers. They give us flowers and they do our hair and makeup and our nails and stuff. And so they keep the focus off of the situation I’m going through right now, and this is the first time I ever lived outside,” she said.

Laura Brent, 42, is spending Mother’s Day apart from her mother and her two children for the first time. She is from Bristow, Virginia, in the Washington, DC suburbs, but found herself homeless in Los Angeles after her car and all her belongings were stolen. Without the $ 400 for a ticket back home, she has been sleeping on the streets and in shelters and says she’s ‘scared to death’.

The Fred Jordan Mission has been hosting a Mother’s Day event since the mission started in 1944. Fred’s wife Willie describes herself as the ‘mother’ of the mission.

“The saddest thing is to see mothers on these streets,” she said. “We give them a chance here.”

The Los Angeles metro area has alone seen a 75 percent increase in unsheltered homelessness in the last six years, partly due to the lack of affordable housing in the area, according to federal data. 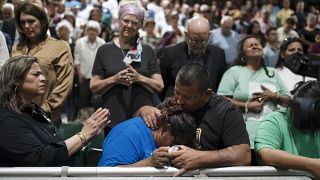