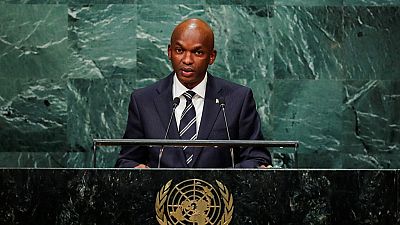 Ambassador Nyamitwe had been in office since May 2015, just after the attempted coup, tasked with containing the diplomatic uproar that followed Nkurunziza’s ambitions to seek a third term in office.

The reshuffle comes less than a month to the referendum. The May 18 vote has been set to allow Burundians vote on whether or not to allow President Pierre Nkurunziza to extend his tenure in office. The president who is already serving a controversial third-term would rule till 2034 if the vote succeeds.

The other new members of the cabinet include Gaspard Banyankimbona, former Rector of the University of Burundi, who has been appointed minister of education, technical and vocational training.

Senator Evelyne Butoyi has been appointed minister of youth, posts and information technologies while Thaddée Ndikumana, former spokesperson of the Ministry of Public Health is now the minister of public health and the fight against AIDS.

Jean-Marie Niyokindi is the minister for trade, industry and tourism.

Burundi has been rocked by insecurity since 2015, when Nkurunziza decided to seek a third term in office that his opponents said was unconstitutional.

Those who opposed Nkurunziza’s third five-term launched an armed struggle against his government, and the resulting violence has left hundreds dead and forced at least 400,000 people into exile.