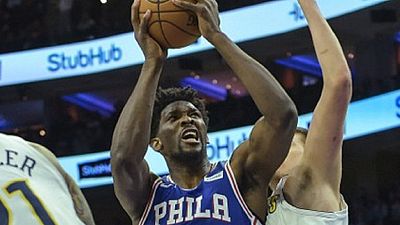 Cameroonian basketball star Joel Embiid took to social media to voice his frustration at being left on the sidelines for his team’s Eastern Conference first round Game Two playoff loss to the Miami Heat on Monday.

Embiid has been out of action since fracturing the orbital bone near his left eye against the New York Knicks on March 28, but the Philadelphia 76ers All-Star center was upset that he was not considered against Miami despite clearing concussion protocol.

“(Expletive) sick and tired of being babied,” Embiid wrote in an Instagram post Monday after Miami tied up the best-of-seven series at 1-1 with a 113-103 win in Philadelphia.

When he is not able to do that he gets frustrated. I respect his frustration, it’s born out of him wanting to be with his team.

So here’s what Joel Embiid just posted on his IG story.
(I mean, he posted it without including the emoji on there, but, well…yeah) pic.twitter.com/BJi65shPxm

Philadelphia coach Brett Brown said he understood Embiid’s frustration at being forced to watch from the sidelines, while acknowledging that the reaction was only natural.

“He just wants to play basketball, he wants to be with his team; he wants to see this through,” Brown told reporters.

“When he is not able to do that he gets frustrated. I respect his frustration, it’s born out of him wanting to be with his team.”

The 24-year-old Embiid established himself as one of the NBA’s top big men and most colorful personalities this season, averaging 22.9 points per game along with 11 rebounds to help the 76ers reach the post-season for the first time in six years.

Embiid is yet to play for the Cameroon National Basketball team hasving not honored the call up to represent his home country in the 2017 FIBA Afrobasket.

Game Three of the series is in Miami on Thursday, although the 76ers have yet to reveal Embiid’s status for the contest.