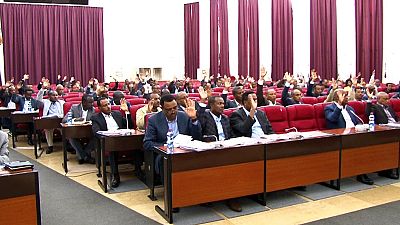 The EPRDF’s 180-member Council has been meeting this week to deliberate on reports of its Executive Council with respect to the performance of the respective parties under its banner.

FBC said a statement sent by the EPRDF office on Friday said: “…the Council acknowledged the presence of weaknesses in promoting internal democracy.”

It added that the day’s session also discussed on ways “to address these challenges and bring about better understanding among the parties.” The coalition said it was doing all it takes to preserve the country’s federal system from threats.

The Council as at today (March 24) is going on with its discussions and deliberations as tabled by the Executive Committee. It is also expected to pick a new Prime Minister to replace outgoing Hailemariam Desalegn.

Desalegn resigned his post on February 15, following which a state of emergency was imposed reportedly to quell spreading violence. Desalegn said he wanted to step aside for political reforms to be fully carried out.

The last two Premiers have come from the TPLF and SEPDM. The late Meles Zenawi was in charge from 1995 till his death in August 2012. Desalegn (as head of SEPDM) took over in September 2012 till his resignation in February 2018.