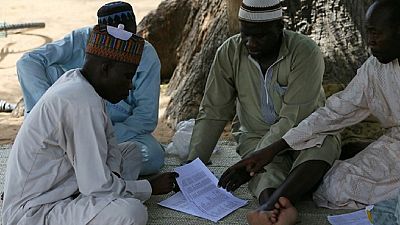 Parents in Nigeria have released a list of the 105 young women they say are still missing nearly a week after Boko Haram militants attacked a northeastern part of the country.

The government yesterday officially put the number of missing girls at ‘one hundred and ten’ with the information minister declaring that ‘we will not rest until we’ve found the girls’.

There had been confusion over the number of those missing, with estimates ranging from about 50 to more than 100. State police, Yobe government and others had given different figures while a parent representing families of girls who disappeared on Friday told Reuters 105 were missing.

This list did not come from the school management or any government source but collated by us from the parents of the girls.

Yobe state government added to the confusion when it said on Wednesday that dozens of the girls had been rescued, only to issue a statement the next day saying the schoolgirls were mostly still unaccounted for, sparking anger among locals.

Bashir Manzo, who has been heading up the relatives’ efforts, said they only took information when a girl’s mother or father appeared in person to report a missing child. His daughter Fatima is among those still unaccounted for.

“This list did not come from the school management or any government source but collated by us from the parents of the girls,” he said.

“As far as we are concerned, the governor is still being fed with fake information about these poor girls.”

President Muhammadu Buhari, the 75-year-old former military ruler elected in 2015 after vowing to crush Boko Haram, has described the disappearance of the girls after Monday’s attack in the town of Dapchi, Yobe state, as a “national disaster”.

“The entire country stands as one with the girls’ families, the government and the people of Yobe State. This is a national disaster. We are sorry that this could have happened and share your pain. We pray that our gallant armed forces will locate and safely return your missing family members,” President Muhammadu Buhari said

The Nigerian Air Force on Sunday said the chief of air staff had “directed the immediate deployment of additional air assets and Nigerian Air Force personnel to the northeast with the sole mission of conducting day and night searches for the missing girls”.

“The renewed efforts at locating the girls are being conducted in close liaison with other surface security forces.”

Information Minister Lai Mohammed, who was part of a delegation of ministers who met parents and teachers in Dapchi and announced the number of missing girls, also said police and security officials had been deployed to schools in the state.

The Islamist militant group attained international notoriety after abducting more than 270 schoolgirls from the town of Chibok.

That case drew global attention to the insurgency and spawned high profile social media campaign Bring Back Our Girls.About 100 of the Chibok girls have never returned to their families nearly four years later.

Boko Haram, whose name translates as “Western education is forbidden” in the Hausa language widely spoken in northern Nigeria, has killed more than 20,000 people and forced two million to flee their homes in a violent insurgency that began in 2009.