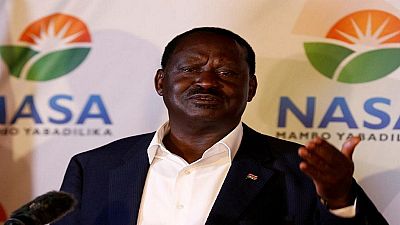 Kenya opposition leader Raila Odinga has threatened to call for nationwide protests if the current regime lead by President Uhuru Kenyatta would not create room to dialogue.

In a New Year message to Kenyans, Raila put Kenyans on notice of a fresh wave of protests to force Jubilee on the negotiating table. The programme includes non-cooperation measures, resistance to the Jubilee government and its support base and the constitution of People’s Assemblies to decide the next course of action.

“The imperial presidency that we sought to contain is rearing its head again, interfering with and intimidating other institutions. We cannot stand by and watch as the monster rises again. Soon, it will be too late,” Odinga said.

He further warned that the only way Jubilee can avoid Nasa’s wrath is by agreeing to dialogue on electoral reforms.

“We can sit down on the negotiating table with our Jubilee opponents and discuss how to fix our electoral system, reform the Executive, protect the Judiciary, reform the security sector and strengthen devolution. We are ready for such dialogue as long as these issues are on the table. Alternatively, we take the issues to the people and let them decide without the involvement of the State,” the former prime minister said.

The opposition has been protesting over the re-election of President Uhuru in the run-off election on October 26. They had boycotted the election citing a partisan electoral body.