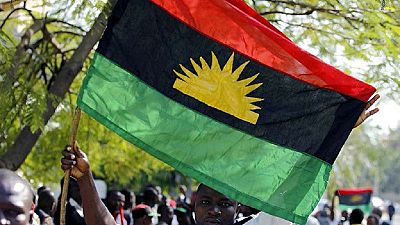 Ahead of Anambra state gubernatorial elections, the proscribed Indigenous People of Biafra, IPOB, raised concerns over indictment of the group by security forces.

Emma Powerful, Spokesperson of the group, alleged the Army, the Department of State Services and police had planted explosives in strategic areas of the state.

IPOB claimed that the explosion of the bombs would be blamed on them, to justify the Federal Government’s claim that IPOB was a terrorist organisation.

“The Nigerian Government and her security operatives especially, the Nigerian army and police, including the DSS, have lost the bid to label IPOB a terrorist organisation among the civilised nations. So, they have resorted to crude evidence-planting as they did with their so-called imported double-barrelled hunting guns at Apapa Wharf.

“Chief of Army Staff, General Buratai and his military hierarchy are desperately using every and any available strategy to justify their actions against IPOB family members in Biafraland particularly in Anambra State because of our boycott threat”, he said in a statement released.

26,000 personnel were deployed by the police for the election while the Civil Defence deployed 13,000 personnel, the number of personnel by the Navy and Army is still unknown but it’s speculated to be several hundreds.

After threats by members of the proscribed Indigenous People of Biafra (IPOB) to disrupt the election, the heavy presence of the Nigerian security forces has further heightened fear and anxiety among the inhabitants.

Nnamdi Kanu, IPOB leader had earlier said unless the Nigerian State calls for a referendum to determine the status of the country, there would be no election in Anambra State.

Today’s election proceedings are keenly watched across the world as its outcome might determine the new course for Nigeria’s sovereignty.