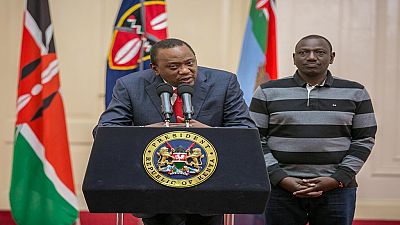 The Kenyan sitting president Uhuru Kenyatta has been slammed for his latest remarks over the Supreme ruling.

Several leaders have called Kenyatta’s remarks as unwanted and lack of respect to the the consitution.

In a statement, four MPs on Sunday said the two leaders are wrong in leading the chorus by a few disgruntled people in attacking the Chief Justice and other Judges of the Supreme Court.

“May we remind President Kenyatta that his presidency in 2013 was upheld by the same court and it is unfortunate that he can now lead the chorus in hurling insults at the court. To the extent of referring the judges as ‘crooks’ is not just absurd but unfortunate coming from the Head of State who is supposed to portray the image of the symbol of unity,” they said in a statement.

President Uhuru Kenyatta had vowed to fix the country’s judiciary following the Supreme Court annulment of his election victory.

While addressing newly elected Jubilee alliance candidates on Saturday at State House Nairobi, Kenyatta criticised the judges’ decision and said he would return to the issue if elected.

“We have a problem with our judiciary,” Kenyatta said, adding however that he would respect the court’s ruling.

On Friday during an impromptu rally in Nairobi, he accused the court of ignoring the will of the people and dismissed the chief justice’s colleagues as “wakora”, or crooks.

Chief Justice David Maraga announced the Supreme Court’s verdict that was backed by four of the six judges, saying the declaration of Kenyatta’s victory was “invalid, null and void”. Details of the ruling will be released within 21 days.

Kenyan judges have slammed the “veiled threats” made by President Uhuru Kenyatta after the judiciary overturned his election on the ground that it was flawed.

Calling it “an assault on the judiciary”, the Kenya Magistrates and Judges Association (KMJA) late Saturday asked people to ignore “political rhetoric.”

“We condemn this assault on the decisional independence of the honourable judges,” he said.