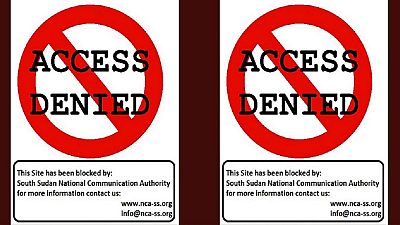 Access to two major news websites have been blocked in South Sudan on Monday without any formal notice.

Websites of Radio Tamazuj and Sudan Tribune were reported to have displayed a sign saying: “Access Denied – This Site has been blocked by: South Sudan National Communication Authority…”

A National Communication Authority official who pleaded anonymity told Reuters the order to block the websites was “government policy.”

Over the weekend, the head of South Sudan’s state television was arrested after failing to carry a live broadcast of President Salva Kiir’s speech during independence day celebrations this week.

The chairman of the authority, Elijah Alier said the unnamed journalists had reported “unsubstantiated and unrealistic stories” that have the potential to incite hate and violence.

These incidents, among others, underscore the continuing harassment of media and journalists in the country.

The world’s youngest country plunged into conflict in December 2013 after a political feud between President Salva Kiir and armed opposition leader Riek Machar, who are from rival ethnic groups.