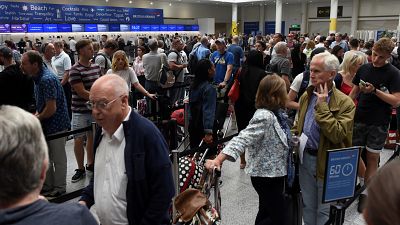 London Heathrow Airport says there are still some disruptions to British Airways flights following a global computer system failure at the airline.
It means the problem is entering its’ third day which has seen thousands of passengers having to queue for hours over the weekend due to the chaos of cancelled flights.

to check on https://t.co/2Ty8CEO0Dq that they have a confirmed booking and their flight is operating, before going to the airport. 4/4

BA has however taken to Twitter to say it will be running a full schedule at London Gatwick today and intends to operate a full long-haul and some short haul services from Heathrow.

BA cancelled all its flights from Heathrow, Europe’s busiest airport and Gatwick on Saturday after a power supply problem disrupted its flight operations worldwide and also hit its call centres and website.

The outage is likely to have cost the airline dear airline as it is liable to reimburse thousands of passengers for refreshments and hotel expenses. Travel industry commentators have suggested the cost to the company – part of Europe’s largest airline group IAG – could run in to tens of millions of pounds.