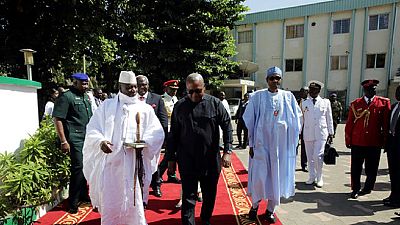 Gambia’s ruling party Alliance for Patriotic Reorientation and Construction (APRC) on Tuesday pressed for a fresh presidential election as West African regional mediators intervened to try to resolve a mounting political crisis in the tiny country that voted out its leader of 22 years from power less than two weeks ago.

The West African leaders who were in Gambia on Tuesday to try to convince Yahya Jammeh to acknowledge defeat in the recent presidential election and cede power failed to reach an agreement in this direction.

A petition signed by the secretary-general of President Yahya Jammeh’s party on Tuesday demanded a new vote with a revalidated voter registry.

The document, which was also signed by a notary public and seen by the AP, said the election was not conducted fairly or in good faith and therefore should be invalidated.

Jammeh initially acknowledged defeat, calling the December 1 election fair and conceding to President-elect Adama Barrow in a telephone call broadcast on state television. But he announced last week that he was rejecting the election results.

The ruling party of the Gambia had filed a petition at the Supreme Court, challenging the election of businessman Adama Barrow.

The APRC fielded the longtime leader Jammeh in the last polls but lost to a coalition candidate, Adama Barrow.

Among the irregularities cited in the petition brought against the Independent Electoral Commission and Gambia’s attorney, general were the different results reported the day after the election and again on December 5. It also questioned why some 360,000 registered voters did not make it to the polls.

Jammeh was contesting for his fifth term after coming into office in 1994.