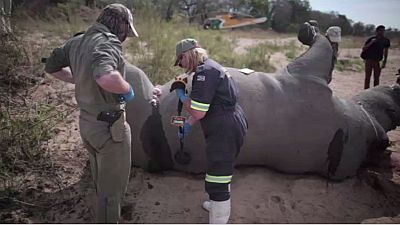 The reports follow a documentary by Al Jazeera which said it had uncovered evidence of high level political connections to rhino poaching in Africa.

Mahlobo had been accused of frequently visiting the local Mbombela area owned by a self-confessed criminal Guan Jiang Guang.

The minister in a statement said it was unfair to link his visits to a Spa in the Mpumalanga area owned by Guan to his participation in the illegal rhino trade by the spa’s owner, stressing that taking photos with high profile individuals does not in anyway represent friendship or connection.

David Mahlobo describes the reports as “unfounded and slanderous.”

South Africa’s security ministry says they have been at the forefront of tackling environmental crimes and will not relent in their efforts to curb transnational organised crime.

Rhino horn trade is a disturbing phenomenon for South Africa which is home to more than 80 percent of the global rhino population.

This illegal trade led to the death of about 1,342 rhinos in Africa last year. Out of this number, 1,200 were killed in South Africa.

The figures just recently increased compared to the situation in 2008 where only about a 100 rhinos were killed in the world.