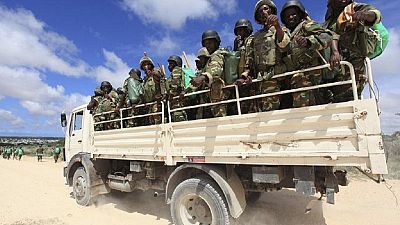 The Burundian government has served notice that it could withdraw its troops from the African Union (AU) force fighting militants in Somalia, they cited the non payment of troops as the main reason for the threat of withdrawal.

The Defence Minister, Emmanuel Ntahomvukiye, on Thursday told parliament that the soldiers had not received their monthly allowance which is supposed to be paid by the European Union (EU).

According to him, the $800 (£640) allowance was in arrears for 10 months. Over that period, soldiers are only receiving their low army wages.

The decision of the EU to cut off its funding for the troops is tied to the ongoing political crisis in the country.

Burundi is the second largest contributor to AMISOM the AU intervention force fighting al-Shabab insurgents in Somalia. Their over 5400 troops come behind Uganda who have over 6000 troops.

Somalia is in the process of conducting its elections and the issue of security is high on the agenda. Recent withdrawals of troops by the Ethiopian government has led to the retaking of towns by al-Shabaab.

Ethiopia have flatly denied that the withdrawal of troops funded by their government is linked to internal anti-government crisis. An al-Shabaab leader however said recently that protests back home informed the move.