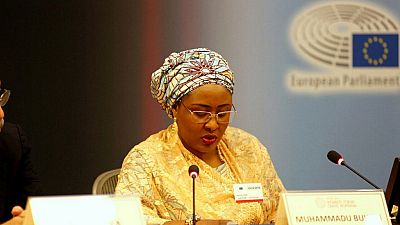 Wife of Nigerian President, Aisha Buhari, dedicated an award she received in the Belgian capital, Brussels, to people who are engaged in the war to restore peace in the country.

to the Nigerian Military men&women who have lost their lives&those at the war front battling to restore peace 3/3 pic.twitter.com/5shJkfnr7W

Mrs Buhari made the headlines late last week when she said in a BBC interview that lest her husband rang changes in his government, she will not vote for him if he decided to seek reelection.

In response to her ‘threat’ Buhari on a visit in Germany stated that she (Aisha) belonged basically to the house and that he maintained superior political knowledge over her.

Nigeria’s army and civilian task force continue to engage Boko Haram insurgents in a bid to rid the country of the insurgents. The army insists that the terrorists have been restricted to the Sambisa forest and are only able to carry out attacks on soft targets.

The insurgency has also given rise to a huge humanitarian crisis in the country. Their action of the insurgents have also affected countries lying within the Lake Chad region. Cameroon’s far north, Niger and Chad all suffer from their attacks.