Bernie Sanders to fight on in primaries 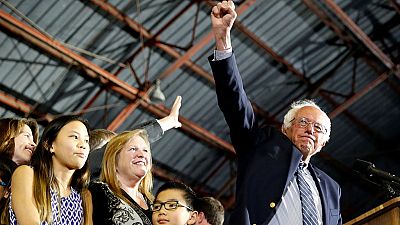 Clinton’s Democratic rival Bernie Sanders has told his supporters he’s not giving up the fight.

He said he had received a gracious call from Clinton and congratulated her on her victories.

But as long as victory is technically possible, the left winger says however difficult the task, his team will continue fighting for each vote and each delegate.

“We are going to fight hard to win the primary in Washington DC, and then we take our fight for social, economic, racial and environment justice to Philadelphia, Pennsylvania,” Sanders told his supporters.

Down but not yet officially out – Sanders’ presence is likely to continue having an impact on the wider race.

Many of his supporters, often young and hostile to Clinton, will be keeping up the pressure on her to keep the Sanders agenda alive.