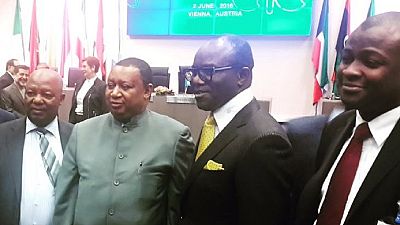 Nigerian Mohammed Sanusi Barkindo, has been named the new Secretary General of the Organization of the Petroleum Exporting Countries‎ (OPEC.) His appointment was announced at an OPEC meeting in Vienna on Thursday June 2.

Barkindo was the Managing Director of the Nigeria National Petroleum Corporation (NNPC) between 2009 to 2010, and served as acting Secretary-General of OPEC in 2006. He replaces Libya’s Abdalla El-Badri.

The Vienna meeting was attended by the 13-members of the organization who chose a successor to El-Badri, whose full tenure ends in July.

Barkindo was a director of the National Engineering and Technical Company (1991–1993), chairman of Stirling Civil Engineering Nigeria Limited (1991–2003) and chairman of the Federal Radio Corporation of Nigeria (2003–2005)

He was born in Yola, Adamawa state ‎on February 14, 1944. He attended Barewa College, in Zaria and then Ahmadu Bello University, where he obtained a Diploma in Law in 1969. Later he attended North London Polytechnic (1973–1975) and St Clements University in the Turks and Caicos Islands (2000–2002).