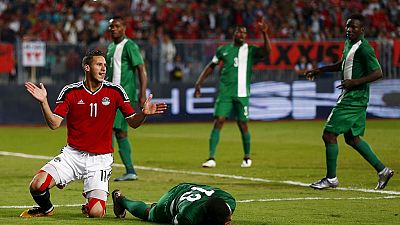 Ramadan Sobhy’s 65th minute strike earned the Pharaohs a 1-0 win over Nigeria in the second leg of their 2017 Africa Cup of Nations qualifying match at the Borg El Arab stadium in Alexandria. The result bundles the Super Eagles out of next year’s continental showpiece in Gabon.

65' Ramadan Sobhy takes advantage of a bad clearance and finds the breakthrough for the pharaohs. Egypt 1-0 Nigeria #EGYNGA #AFCON2017

Nigeria went into the match hanging by the skin of their teeth, tasked with a must-win situation, after failing to get the much needed win during Friday’s home clash at the Ahmadu Bello Stadium in Kaduna.

During the first leg of the tie, Mohamed Salah’s 91st minute strike cancelled Warri Wolves striker Etebo Oghenekaro’s goal to force a 1-1 draw and rescue a point for Egypt.

The withdrawal of Chad from the AFCON race earlier had also piled more misery on Nigeria , which meant all results against Chad remained cancelled.

Nigeria missed out on the 2015 edition in Equatorial Guinea and were desperate for a return, but it appears that Samson Siasia’s men will have to go back and restrategize for Cameroon 2019.

Only the group winners are set to qualify and with just one match remaining, it’s mathematically impossible for Nigeria to make up the five-point gap between them and table-toppers Egypt.

The Pharaoh’s are on the verge of qualifying to face Tanzania in June. They will book their place in Gabon with any result better than a 3-0 defeat.

Here are yesterday's results of the Orange #AFCON2017 Qualifiers, Which team impressed you the most? #AFCON2017 pic.twitter.com/V6I4kWcDvk