Mother Teresa to be made saint September 4 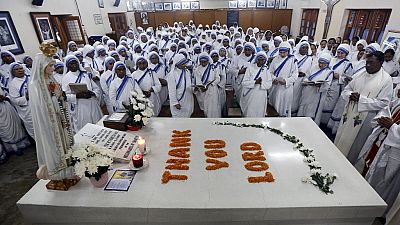 The Albanian nun, popularly known as Mother Teresa will be made a saint in September this year, Pope Francis has announced.

The Pope made the announcement at a meeting of cardinals at the Vatican on Tuesday. A ceremony is scheduled for September 4.

The sainthood for Mother Teresa was approved by the leader of the Roman Catholic Church after a decree recognizing a second miracle attributed to the late nun’s intercession with God.

Mother Teresa, also known as the Blessed Teresa of Calcutta was an Albanian missionary who lived in Macedonia for some eighteen years. She then moved to Ireland and later to India where she spent the rest of her life.

She dedicated her life to helping the poor and died in 1997 at the age of 87.

Beatification is the last step before sainthood and it requires one miracle. A second miracle is however required for sainthood.

Pope Francis, the first Jesuit leader of the Roman Catholic Church according to Reuters was keen on making Mother Teresa a saint during the church’s current Holy Year.

He told the Cardinals at the meeting that 4 others will also be made saints on September 4.

Mother Theresa founded the Missionaries of Charity with about a dozen nuns in the 1950s to help the poor on the streets of Calcutta. She won the Nobel Peace Prize in 1979.