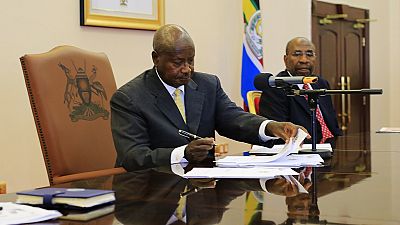 “The bill is intended to regulate what goes on in the communication sector for the good of Ugandans and their security,” he said.

The bill is intended to regulate what goes on in the communication sector for the good of Ugandans and their security.

The minister, Frank Tumwebaze said the aim of the bill is to amend the Uganda Communications Act 2013 by removing the requirement for the sector.

He said Uganda’s parliament mostly dominated by the ruling National Resistance Movement (NRM) party would have to approve the bill removing parliamentary approval.

However, opposition politicians have criticised the proposal but Tumwebaze insisted the new regulations are “not that strict” and necessary to curb the “misuse” of social media with people posting irresponsible statements.

Government blocked social media sites such as Twitter and facebook during the elections in February citing unspecified “national security” concerns. The election saw president Yoweri Museveni winning the election with 61 percent of the votes.

Political observers said the cards were heavily stacked against Museveni’s opponents, as the 71 year old tightened his grip on his party and country.