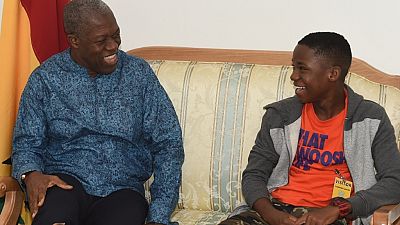 The 15-year-old actor last Saturday won the Best Male Lead Actor at the Independent Spirit Awards for his role as Agu, a child soldier in Beasts of No Nation.

The Cary Fukunaga war film about a young boy who survives a civil war by becoming a child soldier, is the first on-screen role for Attah.

Returning home from presenting an award at the 2016 Oscars, Abraham met with Ghana’s Vice President at the Flagstaff House where he was congratulated for his achievement.

“We congratulate you for what you have done. You have become one of Ghana’s ambassadors, not a paid one,” said the Vice President.

Congrats AttahNii. Such a positive positioning of the Ghana Brand. We can do with many more Abraham Attah's. #BeastsOfNoNation

“You know sometimes you go out in the world and they ask you where you come from and you say you come from Ghana and the Americans will say Kwame Nkrumah and you say yes. Now these days somebody will go out and they’ll say is that the country of Abraham Attah?” Amissah-Arthur added.

There has been a raging debate lately among social media users in Ghana about Abraham Attah’s future as an actor with some suggesting he relocates to the United States.

But the Ghanaian Vice President thinks otherwise. He believes what is crucial for the budding actor is to focus on his education whiles nurturing his talent.

“The best way of nurturing the natural talent is to continue with education. You have to go to school, you have to complete it. You have to learn as much as you can because once you get that no one can take that away from you and you’re also able then to do even better than what you have done,” Mr. Amissah-Arthur said.

The Vice President presented a laptop to the young actor, a tool he hopes will help him with his academic work.

Abraham Attah, who has become a household name in entertainment circles clinched his first award, the Marcello Mastroianni Award for Best Young Actor at the 2015 Venice Film Festival for his role in Beasts of No Nation. Early this year, he also won the Rising Star Award from the Black Film Critics Circle.

His co-actor Idriss Elba who also won Best Supporting Actor at the Independent Spirit Awards last weekend made history by winning two Golden Globe awards in January this year – becoming the first man to have bagged two Golden Globes on one night.