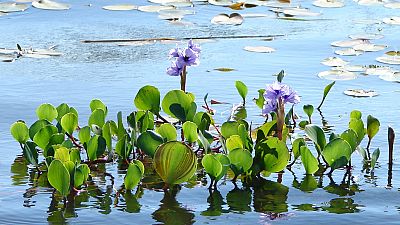 Water hyacinth, a nightmare for fishermen has become a viable resource for some villagers in Benin.

Lake Nokoué in southern Benin, is covered in 339 hectares of the aquatic plant and canoes can hardly sail through.

Not far from the lakeside in the village of Sô-Ava, Green Keeper Africa (GKA) has set up a bio-refinery on the peninsula.

It's as if we had found our savior. Hyacinth was a scourge, now it's a resource.

Launched two years ago, the company is exploring the economic viability of the water hyacinth.

“Currently, there are seven tonnes. We started the business in March 2015 and we harvested 500 tonnes,” said David Gnonlonfoun, an entrepreneur with Franco-Beninese BTP, established 15 years ago in Benin.

In a warehouse, four workers transform the raw material, the water hyacinth, without chemical addition using an artisanal mill.

The dry hyacinths is turned into bio-fertilizers, feed and fiber for absorbing oils and hydrocarbons.

GKA has partnered with Tema, a Mexican company that has developed and successfully marketed the product and Pemex, the Mexican state oil company.

The finished product fiber can also be used to manufacture sanitary napkins.

The company is touching livelihoods in its area of operation. A dozen of women in Sô-Ava have been trained on how to collect and dry the water hyacinth quickly on the banks. They earn some 200 CFA francs per 10 kilos.

“It’s as if we had found our savior. Hyacinth was a scourge, now it’s a resource,” said André Todje.

The company started with 3 million CFA francs (4,573 euros) put together by the three partners with additional technical and financial support coming from SENS-Benin.

Native to South America, Water Hyacinth was first introduced in East Africa in the late nineteenth century before it spread across the continent.