Israeli police on Wednesday shot dead two Palestinians during a stabbing rampage along a popular walkway in Jerusalem.

The two attackers were killed after they attacked Jewish pedestrians outside the city’s Jaffa Gate.

Israeli police spokesman, Micky Rosenfeld, says at least three Israelis were wounded in what authorities called a terrorist attack. However, the force did not disclose detail of the severity of their wounds.

Recent reports indicate that Palestinians are frustrated at the failure of long-running peace efforts with Israel and its 48-year occupation of the West Bank.

Many in the area have called on the Palestinian Islamic group Hamas for the destruction of Israel. 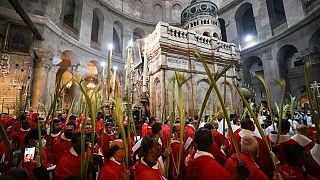