The “Great Green Wall” that was once envisioned as a way for Africa to fight climate change has stalled.

The idea behind the project was to plant a 5,000-mile line of trees that would span the entire continent and hold back the Sahara Desert.

"The water and forestry service had planted trees in many parts of the forest to stop the advance of the desert. The "curtain" (of trees) that makes part of the strip along with other trees has stopped the desert, because before, everything we tried to put in place here was doomed to failure."

Fall's citrus orchard, which he began in 2016, is one method of empowering communities agriculturally and economically to grow and withstand changing times.

He jumped at the chance to plant one near a water source on his land.

"Here the water is the main source of occupation . On days when we have enough, we can water our vegetable fields which will provide us with income and as a result we will be able to support our husbands. N'diaya Fall, resident of Ndiawagne Fall village stated.

Organizers have shifted their focus from planting a wall of trees to trying a mosaic of smaller projects to stop desertification.

It is a success story and one of 800 such small orchards in six communes of Senegal's Kebemer town.

"Today, we have more than 764,000 trees, either in orchards, or on the dunes, so this is the project of what we call an integrated reforestation programme, so we integrate it with agriculture. Any project has to start from the communities if you want it to be sustainable, and that is what we call community ownership. These are the two elements that guarantee the sustainability of projects. If you do a top down project where you don't involve the communities, you go away and the project falls apart." Diegane Ndiaye, member of SOS Sahel group said.

More than a decade since the Great Green Wall project began in earnest, in 2007, only four percent of the original pledge goal has been met, and it's estimated that $43 billion would be needed to reach the original 2030 target, which is unlikely to happen amid the global economic downturn brought on by the pandemic. 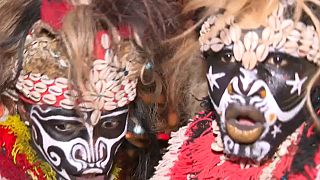