Firefighters confirmed this, adding "Eight victims, including four dead and four wounded, were registered in Mossikro," a poor area of Abidjan.

Most parents could not hide their tears as they mourned the death of their children.

"I pushed the door open and it wouldn't. I had to shout, I was banging on the neighbours' doors shouting 'get out, get out' as the whole yard filled with water. My daughter was in the house, she called me 'daddy, daddy'. I came and lifted her up and took her outside. I then saw my other child, was dead."

A video which circulated online showed the floods sweeping away a number of properties in it's path including a car. Firefighters launched a search to find the two children but as at the time of filing this report, there had not been any success story.

Most of the victims lived in areas with little infrastructure, that could easily become unstable in bad weather.

Abidjan's rainy season usually lasts from May to late July, but climate change has contributed to unexpected late rainfall. 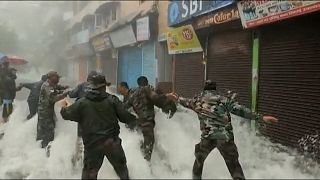