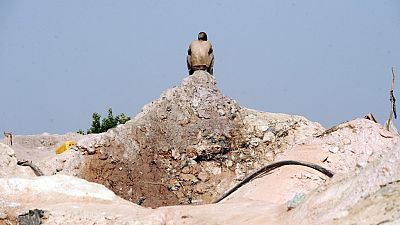 At least seven "illegal gold diggers" died on Wednesday in the old galleries of an industrial gold mine in north-central Burkina Faso, angering local people who set fire to several vehicles on the site, sources said on Thursday.

On Wednesday, "gold miners smuggled themselves into the old galleries of the Bissa Gold mine, in the province of Bam," said a police statement.

During searches by the Republican Security Company (CRS) responsible for securing the site, "six lifeless bodies, probably dead from lack of air due to the depth of the holes (galleries)", were discovered and seven others injured, it added.

One of the injured died of his injuries, bringing the death toll to seven, according to local residents contacted by AFP.

Following this tragedy, "reprisals by the population, mainly gold miners, caused significant material damage to the mine site," said a worker at the mine site on condition of anonymity.

"There was material damage to the factory, more than a dozen vehicles were set on fire," but "the security forces secured the site," said a mine official, stressing that, "very affected by the death of the gold miners inside its domain, (it) stopped operations in memory of the victims.

The police, who made no mention of the damage in their statement, invited the population "to remain calm and restrained" and "reminded them of the imperative need to respect the regulatory measures taken by the government regarding artisanal exploitation of mining sites.

Incidents are frequent at gold mining sites in Burkina Faso, where the populations of the localities where these mines are located consider that the benefits for the local communities are very low.

With seventeen industrial mines in operation, the gold sector contributed 13.13% to Burkina's GDP in 2019 (compared to 10.6% in 2018) and generated CFAF 275 billion in budgetary revenue.

Gold has become in a dozen years a strategic economic sector for this poor and landlocked country of 20 million people, whose main export product was previously cotton.

Bordering Mali and Niger, Burkina has been the scene of regular jihadist attacks since 2015, which have left some 1,400 people dead and more than a million displaced.

Jihadist groups often target gold mine workers. The last attack was in November 2019 in Boungou (east), killing at least 38 people, the deadliest action of its kind.