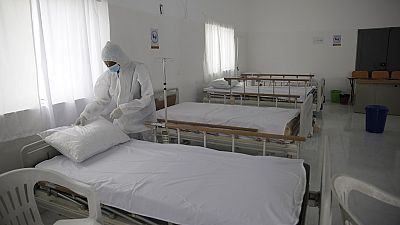 The Osun State government in Nigeria has mounted a manhunt for six coronavirus patients who escaped from an isolation facility in the the town of Ejibgo.

The group were under quarantine and treatment by the state government. Osun is Nigeria’s third most impacted state behind Lagos and Federal Capital Territory, Abuja. As of April 4, Osun had recorded 22 cases according to details released by the Nigerian Center for Disease Control.

The state government has since described the reports as untrue, an official said there was only one patient who was the subject of a manhunt.

In a statement, Funke Egbemode, commissioner for information, said a headcount which was conducted on Saturday morning, showed that only one person could not be accounted for.

“Nothing can be further from the truth. As a government, we have not issued any statement to confirm or deny such story. Besides, a quick check showed that the name and number of the first person on the list of the purported missing patients, is indeed currently in our facility in Ejigbo.

“Recall that about a week ago, we received 127 returnees from Ivory Coast and we have kept them since then to avoid community transfer of the virus,” her statement read in part.

Meanwhile, on Twitter; names, location and contacts of the alleged six are making the rounds seeking cooperation of the public in accosting the group. Nigeria’s tally currently stands at 210 with four deaths and twenty-five people discharged after successful treatment.

The federal government imposed a lockdown on Osun, Lagos and Abuja as part of efforts to contain the spread of the virus. People on social media are largely calling for public support to apprehend the patients.