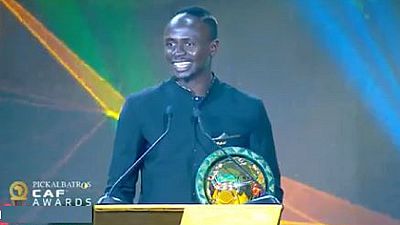 Senegal and Liverpool forward Sadio Mane was awarded the African best player 2019 at an event in the Egyptian city of Hurghada on January 7. He became the final awardee for the decade 2010 – 2019.

He succeeds Liverpool teammate Mohamed Salah who was also shortlisted along with Manchester City’s Riyad Mahrez who led Algeria to AFCON glory in 2019. Both contenders were absent at the ceremony.

Mane received the award from the president of the Confederation of African Football, CAF, Ahmad Ahmad. On stage was the first award winner for the decade, Samuel Eto’o of Cameroon won his fourth award in 2010 when he was with Italian side Inter Milan.

Mane helped his club side win the UEFA Champions League in the 2018/2019 season and was captain of the Senegal side that lost the 2019 AFCON to Algeria in Egypt.

This was the fourth straight time that he had been shortlisted for the award. He lost in 2016 to Gabons Aubameyang (at the time with Dortmund). Then missed out to Salah twice in 2017 and 2018. Many analysts projected after the AFCON that this was his year despite the final loss.

Who won what on the night: