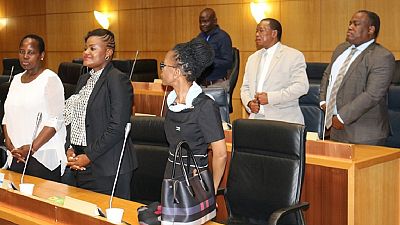 Botswana’s 12th National Assembly is composed of 57 elected parliamentarians, of which 54 are men. The president reiterated the need to increase the presence and participation of women in politics.

This requires national reflection to address the gender imbalance in politics.

“While women account for 55 percent of registered voters in Botswana, the 2019 elections represent a downward shift in the representation women in political leadership, particularly at the National Assembly level”, Dr. Sibusiso Moyo, who was the head of the observation mission.

In 2014 female representation in politics stood at 8.7 percent. Out of the 192 parliamentary aspirants 17 were women.

“In 2019, however, only 11 out of 210 parliamentary candidates were women, representing five percent of the total, which demonstrates a downward shift from the gains of 2014. This requires national reflection to address the gender imbalance in politics.”

Special nomination is a presidential dispensation, which allows the head of state to rope in expertise, which will lend insightful expertise to the legislation arm of government.

The recently endorsed special elected parliamentarians, Peggy Serame, Beauty Manake, Phildah Kereng and Doctor Unity Dow, are high achievers in their own right and expected to add value to the debates of the August house.

Prior to her appointment, Peggy Serame was a action deputy permanent secretary to the President. She has also over the last four years coordinated regional integration and negotiated trade agreements in the the ministry of Investment, Trade and Industry.

Beauty Manake is a full-time farmer who started off with a 16 hectare farm and grew it into a 4,410 hectare commercial farm within 10 years. She has a passion for impacting rural transformation through developing agriculture.

The third woman to be nominated by president Masisi to parliament is 60-year-old Dr Unity Dow. She is a former high court judge, human rights activist and a writer. In the last parliament she served as the Minister of Foreign Affairs and International Cooperation.

Philda Nani Kereng is a social activist and human rights advocate with 24 years of experience in social development and child protection. Kereng was instrumental in the development of the national policy on Orphans and Vulnerable children (2008) and the Children’s Act (2009).