#NoBraDay Nothing naughty, a bold statement for breast cancer awareness 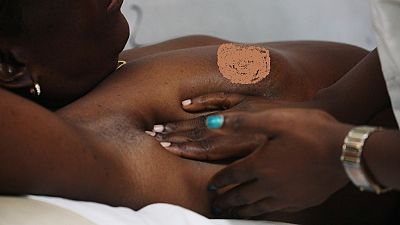 There might be some pictures of naughty breasts cropping up on your time line, some for the the wrong reasons but what the world is trying to talk about this month is the advent of breast cancer. The hashtag blazing on social media #NoBraDay is just for that purpose, don’t get it confused.

At least 2.1 million women are diagnosed with breast cancer annually of which an estimated 627,000 die from it,and that is approximately 15% of all cancer deaths among women according to the World Health Organization

Due improved medical care across the world, the cases of breast cancer diagnosed early are giving an 80 to 90 percent survival rate in most countries

The risks of getting cancer

Breast cancer is a type of cancer that starts in the breast. Cancer starts when cells begin to grow out of control. The most common symptom of breast cancer is a new lump or mass. A painless, hard mass that has irregular edges is more likely to be cancer, but breast cancers can be tender, soft, or round. Other possible symptoms of breast cancer include: swelling of all or part of a breast, skin dimpling,breast or nipple pain,nipple retraction (turning inward), nipple or breast skin that is red, dry, flaking or thickened, nipple discharge (other than breast milk) and swollen lymph nodes reports American Cancer Society

Breast cancer risk doubles each decade until menopause, after which the increase slows. However, breast cancer is more common after the menopause. Due improved medical care across the world, the cases of breast cancer diagnosed early are giving an 80 to 90 percent survival rate in most countries according to World Cancer Research Fund

How to avoid cancer

“Researchers at Mayo Clinic in Jacksonville, Florida say a vaccine they have developed could be available within eight years that may not only stop the recurrence of breast and ovarian cancers, but prevent them from developing in the first place,” reads a report by Forbes

Lee Mercker, from Florida, US, became the first patient to take part in a Mayo Clinic trial for a new vaccine after being diagnosed in March with early stages of the disease. The vaccinne still on trial has reportedly helped remove cancer cells in the breast cancer of the patient, Lee reports The Sun

According to Mayo Clinic treating breast cancer has long involved addressing two problems: the elimination of cancer cells from the tumor and potential disease recurrence.Mayo Clinic researchers recently received a grant of $11 million from the Department of Defense to push the next studies of the vaccine ahead and help address this unmet patient need.

RIP to all men and women who lost their lives to breast Cancer.
Self breast exam is key.#breastcancerawareness pic.twitter.com/s7YaZ3cE0a

We celebrate ? all the ladies dealing with breast cancer. #NoBraDay pic.twitter.com/eymUCKEv0T

Breast cancer being the most common cancer among women worldwide, early detection however remains the cornerstone of its control. All women of reproductive age are therefore encouraged to perform breast self-exams at least once a month.#NoBraDay pic.twitter.com/ua9oIOXxDi