Jammeh ordered killings of journalist, US citizens and migrants: soldiers 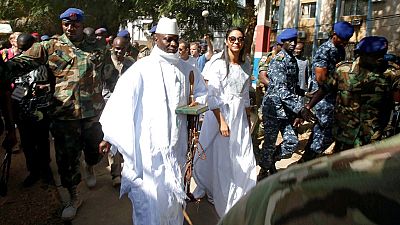 Gambia’s Truth, Reconciliation and Reparations Commission (TRRC) continues to hear shocking and damning revelations of the extent to which former president Yahya Jammeh violated human rights and abused power during his 22-year reign.

The commission which opened in January this year,has board members drawn from all the country’s major regions, its five main ethnic groups and two religions, led by a retired UN diplomat, Lamin Sise.

In this article, we will keep track of key testimonies that emerge out of the commission described by president Adama Barrow as ‘a step towards national healing’.

Barrow added that the commission offers a way to prosecute those responsible and offer some closure to victims and families.

The commission is empowered to advise prosecution of perpetrators and recommend financial compensation to victims.

Vendor Mariama Mangaendor told AFP he was “shocked when I watched television and see Staff Seargeant Omar Jallow confessing to taking part in the execution of 48 people on the orders of ex-President Yahya Jammeh. I regretted voting for Jammeh in past presidential elections.”

Musa Manjang, a taxi driver, added: “Jammeh has been exposed at last. Who will now deny that he was the one responsible for the mysterious disappearances of people including the abduction and killing of over 50 West African nationals?”

The US embassy in Banjul welcomed the revelations.

“This week, testimony… provided details surrounding the direct involvement of former president Jammeh in the disappearance of American citizens Alhaji Ceesay and Ebrima Jobe in 2013,” it said in a statement.

“The United States welcomes the additional information that has come to light as this provides an opportunity to renew our investigation into the circumstances surrounding their deaths.”

Former members of a Gambian death squad known as the Junglers on Thursday accused ex-president Yahya Jammeh of ordering the murder of two US citizens in 2013.

Since Monday, Gambians have been gripped by live coverage of three ex-Junglers, Malick Jatta, Omar Jallow and Amadou Badjie, before the West African country’s Truth and Reconciliation Commission.

On the last day of hearings before the commission adjourns until August 5, Badjie, a member of Jammeh’s elite hit squad, said the head of state had ordered in June 2013 that two US-Gambian businenessmen, Alhaji Ceesay and Ebrima Jobe, who he suspected were planning a coup, should be “chopped into pieces”.

The two men were arrested and taken to the president’s residence in the village of Kanilai, Badjie said.

“These two people were suffocated to death and their heads chop off. We buried these corpses in one grave,” he said.

Earlier, the witnesses said they took part in strangling to death Haruna Jammeh, Jammeh´s cousin, as well as the torture of outspoken cleric Imam Baba Leigh and the 2012 execution of nine prison inmates.

Lieutenant Malick Jatta, a Gambian army officer told the commission that he and two colleagues shot dead journalist Deyda Hydara in 2004 on orders from president Jammeh, providing the first direct account of the previously unexplained killing.

Jatta who confirmed being a member of Jammeh’s elite guard, known as the “junglers”, also admitted to involvement in the killings of more than 50 migrants in the following year.

Hydara, a critic of Jammeh’s government and co-owner of the independent newspaper The Point, was killed on the outskirts of the West African country’s capital Banjul.

Jatta told the commission that on the day of Hydara’s killing, the leader of the mission, Captain Tumbul Tamba, Jatta and two other soldiers, Alieu Jen and Sana Manjang, picked up a car from Jammeh’s residence in the town of Kanifing.

“Tamba was speaking to Jammeh by phone,” said Jatta. “He was saying to him, ‘Yes Sir, Your Excellency.’”

“We met a car and Tamba, who was driving, said, ‘This is the idiot’(Hydara) and he ordered us to shoot,” Jatta said. “I shot at him…My colleagues Alieu Jeng and Sana Manjang also fired.”

Jatta said he was paid 50,000 dalasai ($1,000) for the hit. He said he only learned the following day that the target had been Hydara, who also worked for Agence France-Presse and Reporters Without Borders.

Tamba died several years ago. The whereabouts of Jeng and Manjang are not known and they could not be reached for comment.

Jatta’s testimony also corroborated findings of Gambian investigators who accuse Jammeh of ordering the killing in 2005 of about 50 migrants who he feared had come to overthrow him.

The victims included 44 Ghanaians, 10 Nigerians, two Senegalese, three Ivoirians and one Togolese. Most of their bodies were dumped down a well in neighbouring Senegal.

Members of Jammeh’s political party have denied such accusations of human rights abuses and corruption.

At least three women have accused Jammeh of sexually assaulting them including a former beauty pageant queen, Fatou Jallow.

Jallow, who says Jammeh raped her four years ago, plans to testify before Gambia’s truth and reconciliation commission.

Human Rights Watch described Jammeh as a sexual predator who lavished gifts on young women and their families before violently attacking them.

The first witness Ebrima Chongan, a police deputy inspector general before the 1994 coup which brought Jammeh to power, testified that he was tortured in a rat-infested prison outside the capital Banjul after the coup.

He said one government official put a gun in his mouth.

“They beat me and pulled me out and showed me some blood and one of the soldiers asked me to say my final prayers,” he said. “I am not embarrassed to say I was screaming. I thought I would die.”

At least 200 people crowded the exhibition hall of a Banjul hotel for the first day of hearings, with dozens more huddled outside within earshot while others tuned in across the country to live radio and television broadcasts.

“Today is the day, and we want to hear from every single witness and victim,” said Baba Jallow, the commission’s executive secretary, who as a journalist in 2000 was forced into exile by threats from Jammeh’s forces.

After Jammeh took over The Gambia, the smallest country on the African mainland, he installed a network of oppression, driven by the police, the National Intelligence Agency (NIA) and a death squad called the Junglers.

Atrocities uncovered in the past two years include the execution in 2005 of 52 migrants from neighbouring Senegal whose bodies were dumped down a well.

His reign began to fall apart in 2016, when he suffered an electoral defeat at the hands of Barrow, then an opposition leader.

He refused to step down, but was forced out after other West African countries intervened militarily and diplomatically. He flew into self-imposed exile in Equatorial Guinea.