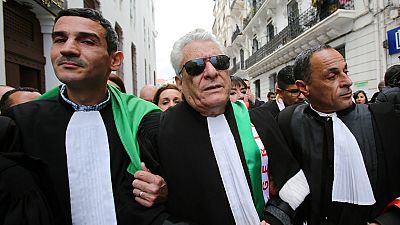 Hundreds of Algerian lawyers protested again on Saturday in the capital, Algiers to demand the immediate resignation of President Abdelaziz Bouteflika who has been for 20 years in power.

The lawyers gathered in Algiers’ centre, the scene of mass protests for one month, holding up slogans that read: “Respect the will of the people” and “Yes to a judiciary free from corrupt dignitaries.”

Algerians first took to the streets a month ago to protest against Bouteflika’s plan to seek a fifth mandate.

The 82-year old, who has rarely been seen in public since suffering a stroke in 2013, bowed to the protesters last week by reversing plans to seek re-election.

But he stopped short of quitting as head of state and said he would stay on until a new constitution is adopted. The move further enraged Algerians, and many of Bouteflika’s allies have turned against him.

Some members of the ruling National Liberation Front party, known by its French acronym FLN, have also sided with the demonstrators.

The powerful military has been watching the protests unfold.

The generals have intervened in the past at momentous times, including canceling an election which Islamists were poised to win in 1992, triggering a civil war in which an estimated 200,000 people were killed.

Lawyers carry a national flag as they march during a protest to demand the immediate resignation of President Abdelaziz Bouteflika, in Algiers, Algeria https://t.co/LQz95hNyCS pic.twitter.com/nuubt552oT

Hundreds of thousands protested across the North African country on Friday.