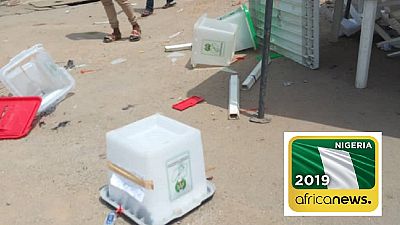 Of all places, the commercial capital of Lagos has been hit by electoral violence according to reports by local portals and eye-witnesses.

The incident took place at Okota, Oshodi/Isolo Local Government Area, LGA, a video posted on Twitter showed people running away from a polling units as live rounds were being discharged.

Voting materials at a polling unit was also seen being burnt after a scattered center. Security has always been top of the agenda during the campaign and a serious concern during the polls.

Authorities assured that enough security had been deployed to quell any incidents of especially ballot snatching and other forms of infraction.

President Buhari had earlier this week stressed that the security forces had been given full orders to shoot at any person or group of persons who attempted to snatch ballot boxes.

The main opposition Peoples Democratic Party, PDP, called him out for the orders saying he had given “shoot to kill” orders only because he aimed to subvert the will of the people using intimidation.

Buhari’s caution was issued at a meeting of the national caucus of the ruling All Progressives Congress, APC, in the capital, Abuja.

“I do not expect anybody to make any disturbance. I have briefed the law enforcement agencies and the military, they have identified hot spots, flash points, they should be prepared to move.

“I really gave the military and police order to be ruthless… Anybody who thinks he has enough influence in his locality to lead a body of thugs to snatch ballot boxes or disturbs the voting system, will do so at the expense of his own life.

“We are not going to be blamed that we want to rig elections. I want Nigerians to be respected, let them vote whoever they want across the parties.”

Buhari’s comments was met with a swift riposte from the main opposition Peoples Democratic Party, PDP. Whiles they accused Buhari of giving shoot to kill orders, pro-government activists insist that he was only speaking in the language that ballot snatchers understand.