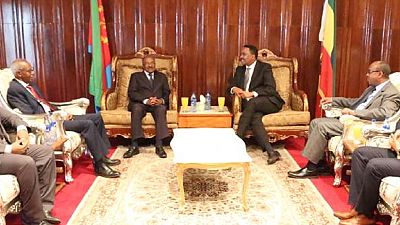 The last four months – October 2018 to January 2019 – was a trial period for trade and transport relations between Ethiopia and Eritrea, Eritrea’s information minister disclosed on Tuesday.

Yemane Meskel said in a tweet that as part of plans to bolstering the experience gleaned over the period, Foreign Ministers of both countries were due to hold a high-level meeting soon.

Border crossings between the two neighbours were formally opened in September 2018, about two months after their respective leaders signed a peace deal in Asmara ending decades of a bitter and costly border war.

Ethiopian Prime Minister Abiy Ahmed along with Eritrean President Isaias Afwerki were joined by hundreds of people on both sides of the border for the opening which was a significant part of people-to-people relations since the peace deal.

Soon after the July 9 deal signed in Asmara, regular flights were started between the two neighbours and telephone connection was also reopened as families united in heartwarming scenes.

A lot of trade was seen especially from Ethiopia to the Eritrean side of the border whiles aid agencies reported an upsurge in the number of refugees entering Ethiopia from Eritrea.

At a point one border crossing was closed with Ethiopian authorities saying they did not have any idea why Eritrea closed their side. Barely a month later, the two leaders met again to open another border crossing.

The prospects of trade boom between the two countries stems largely from the unfettered access that Ethiopia – the region’s most populous nation, would have to the Eritrean ports. They currently have most of their imports coming in via neighbouring Djibouti.

Eritrea-Ethiopia Interim High Level Committee, led by the Foreign Ministers of the two countries, is undertaking consultations to regularize trade and transport relations. These consultations have come in the wake of experience gleaned in four months of trial period. pic.twitter.com/bK0hieLIG8