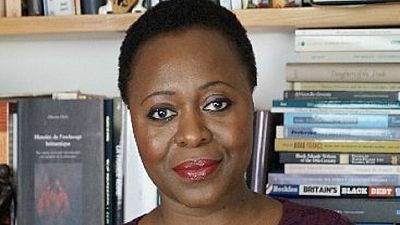 The United Kingdom just had its first black female history professor thanks to the Bath Spa University whose main campus is located at the Newton Park on Duchy of Cornwall land.

The glass ceiling breaker in this regard is historian Olivette Otele who has Cameroonian origins according to the History Today news portal. The BBC describes her as a Cameroon-born academic who schooled in France but is currently teaching in the UK.

In announcing the big news of her professorship she wrote: “BIG NEWS: my people, @BathSpaUni has awarded me a professorship and a chair in history.

“May this open the door 2many v (to many very) hard working women, especially WoC (women of colour), even + specifically Black women, in academia in general & in History in particular. In strength, peace and love my ppl (people),” she wrote.

The university’s page on Olivette shows that she is largely a student of the famed French institution, Universite La Sorbonne, Paris where she received her first degree in Literature and History two decades ago.

She currently holds professional membership of amongst others: Fellow of the Royal Historical Society (FRHistS), Executive board member, The British Society for the Eighteenth-Century Studies and Board member, Historians Against Slavery.

She has co-authored a book and has a series of publications to her credit. Her personal statement on the university’s website reads in part: “Dr Otele holds a PhD in History from Universite La Sorbonne, France. Her doctoral area of specialisation was European colonial and post-colonial History.

“It included examining questions related to the transatlantic slave trade, slave societies, identities and post-colonial societies in the Atlantic world. Her BA and MA trainings were grounded in British and American Literature and History.

“Her current research centres around transnational history and in particular the link between history, collective memory and geopolitics in relation to British and French colonial pasts.

“She charts and analyses the ways in which Britain and France have been addressing questions of citizenship, race and identity through the politics of remembrance. She also enquires into the value of public gestures, the meaning of public history and the impact of cultural memory.”

The social media reactions have been pouring in thick and fast from different quarters since she posted the news of her professorship.

This is a fantastic achievement Olivette, well done from all at Bath Spa University! ? You have made #BathSpaProud https://t.co/Nj7jNe4rMS

The biggest and bestest news!!! OlivetteOtele is the first black woman to be a professor of history in this country. https://t.co/SnFcocuavn

Congratulations to OlivetteOtele on becoming the first black woman to be made a professor of history in Britain. Here she is 'On the Spot' earlier this year. https://t.co/UxwAKFnNGi

Earlier this year, Professor Otele joined us for a discussion on the women who have made #history (2/2) pic.twitter.com/zDfEpO86KS

Congratulations indeed. OlivetteOtele is the first black woman EVER to be awarded a chair of History in British universities. How long this has taken! May it be the first of many. Wonderful to see that 5.6k people have favourited her tweet !